Art Basel: delving into the works of artists in residence at CERN

From four winners of the Collide Award–Julius von Bismarck, Ryoji Ikeda, Suzanne Treister, and Black Quantum Futurism–to the recently selected artists for the first edition of Connect, AATB, we explored at the Swiss fair's long-awaited return the wide diversity of works and research of the artists that have been part of our programmes.

Art Basel wrapped its 2021 edition of its Swiss fair last Sunday. After an 18-month’s gap due to the pandemic curbs, the world’s top contemporary art fair returned to embrace a phygital format to engage with an international audience limited by travel restrictions. From the Parcours’ installations in off-the-beaten-track locations and bold performances at the Messeplatz, to supersized projects in Unlimited and a variety of modern and contemporary works in the Galleries sector, art was everywhere across the Swiss town.

Programmed by artist and e-flux co-director Julieta Aranda, Guest Artist at CERN in 2017, the Conversations programme was a platform for dynamic dialogue around the current issues that have been shaping contemporary culture. Under the title Rewriting the Future: Science Fiction and Contemporary Art, the programme put in conversation artists Rasheedah Phillips from Black Quantum Futurism and Sophia Al-Maria with Head of Arts at CERN Mónica Bello. 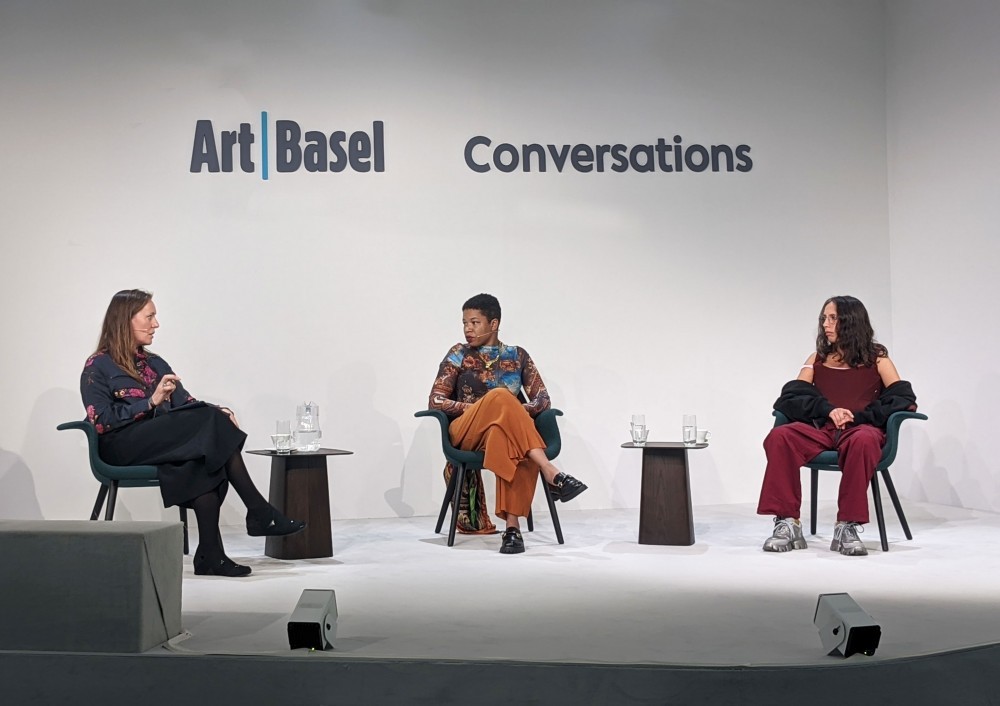 “According to the principles of quantum physics, “things” at a subatomic scale behave so bizarrely that they are inconceivable to human experience and imagination. As a CERN theoretical physicist commented recently, 'the arrow of time does not exist in fundamental physics, and have it on our human scale is a massive question; and we do not feel we are close to an answer,'” Mónica Bello remarked during the discussion. Through the influential work of Ursula K. Leguin and Octavia Butler, the artists and curator explored the potential for speculative fiction to dismantle fatalistic understandings of the future and to conceptualise tools for experiencing reality through various times, spaces and scenarios. If you missed the conversation, you could rewatch it now via Art Basel’s Facebook Page.

Phillips has just finished the first part of their Collide residency at CERN. During the past few weeks, they researched for their project CPT Symmetry and Violations in dialogue with several scientists, including theoretical physicists Dorota Grabowska and Wolfgang Lerche, and experimental physicists Helga Timko and Támara Vazquez Schröder. After their stay in Basel, Phillips is now in Barcelona for their first stay at the Hangar Centre for Art Research and Production, in connection with The Institute of Cosmos Sciences of the University of Barcelona (ICCUB).

“I wanted to try to compose complicated scientific data, which is actually fact, into a single artwork. I just wanted to understand what nature is,” Japanese artist Ryoji Ikeda explained to FACT Magazine about his data-verse trilogy, a complex aesthetic investigation into the science of the natural world. Parsing vast data sets from CERN, NASA, and the Human Genome Project with self-written programmes, Ikeda folds DNA sequences, quantum physics, and cosmology into three monumental video projections with accompanying soundtracks. The result is a perspective-altering reminder of the scale of the universe.

Winner of the Collide Award in 2014, Ikeda has been working with data since the early 2000s, employing creative coding to develop an audiovisual language to explore what he terms “an aesthetics of data, information and computer science”. In a recent interview with The Guardian, Ikeda remarked that the implicit message of human smallness in a vast universe is an upshot of his time in the Laboratory. “Handed a set of keys and the freedom to roam the labs at will, he felt that the quest to resolve the mystery of the universe was premised on blind faith: the research performed by the scientists [at CERN] is “completely invisible”, so “unthinkably small that they can’t see it or touch it”.” 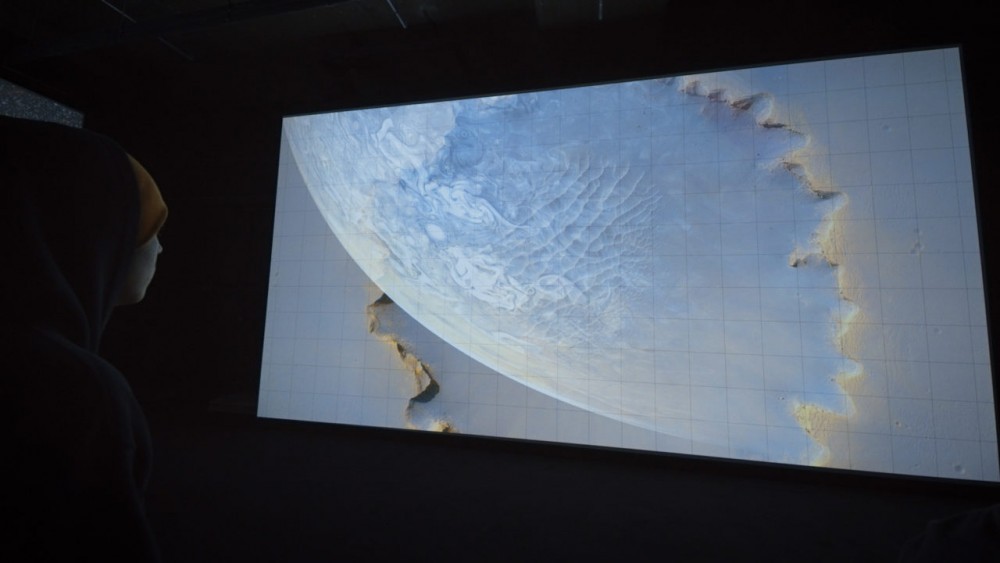 The third iteration of the work, data-verse 3, 2021, was presented at the Swiss fair. Commissioned by Audemars Piguet, the complete trilogy was the main piece of his recently closed show at 180 Studios in London, the largest exhibition of Ikeda’s works in Europe to date.

Julius von Bismarck’s suspension of a high-sea buoy, Die Mimik der Tethys, 2018/20, submerged visitors metaphorically under the ocean. Appearing to fly weightlessly, the massive steel object reproduces the movements of a buoy at sea in real-time. Back in 2012, von Bismarck was the first artist in residence at CERN, as the winner of the first edition of the Collide Award. In his practice, the artist delves into questions on the human perception of natural phenomena, and oscillates experimentally between scientific and artistic perspectives, creating powerful aesthetic imagery.

For this work, the artist placed an accelerometer on a buoy located off the Atlantic coast to transmit its movement data to its replica in the exhibition space. Balancing between gentle and violent movements, the hypnotic installation dives the viewers into an immersive relationship with nature, unveiling in an especially unstable way. 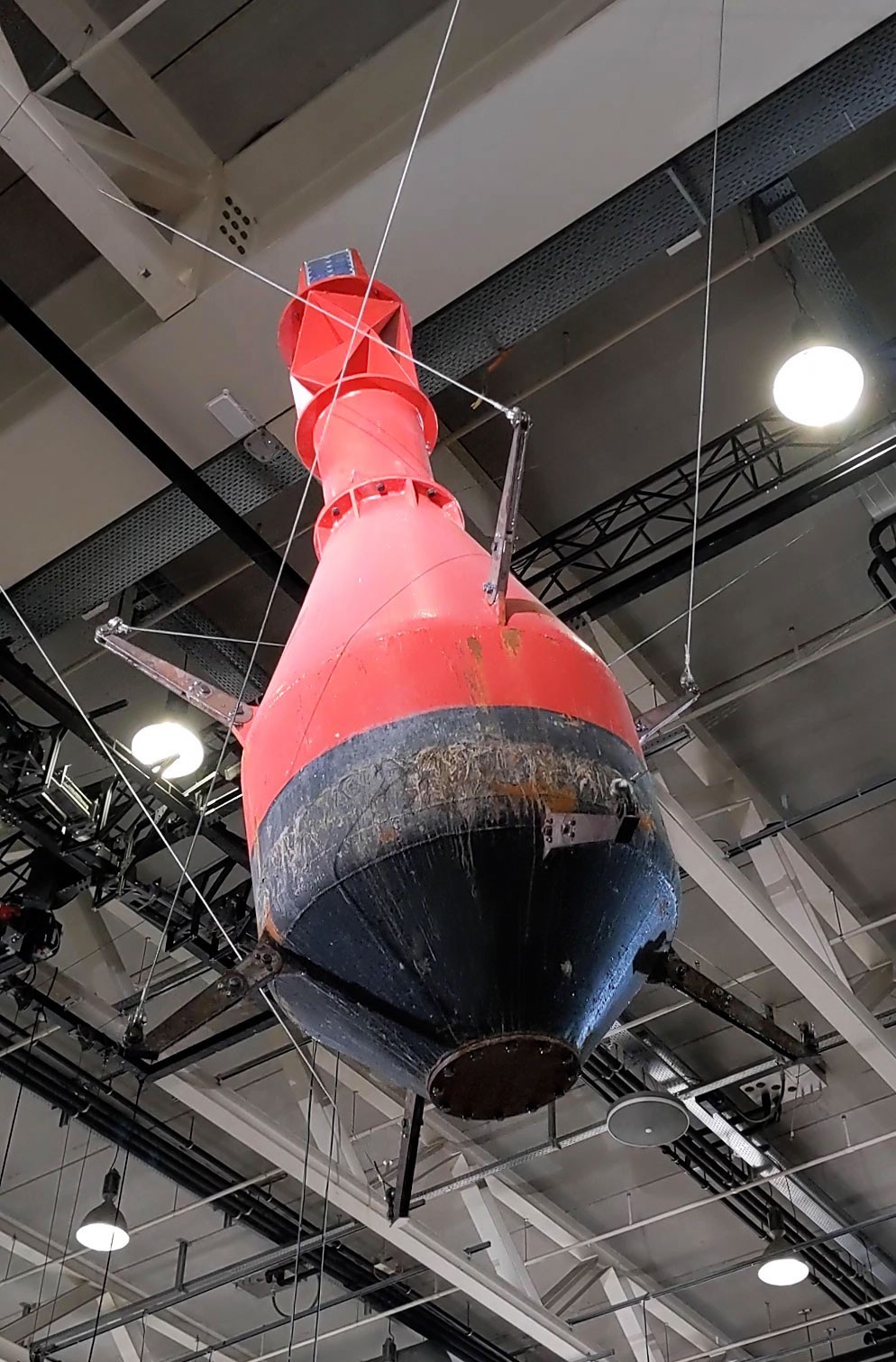 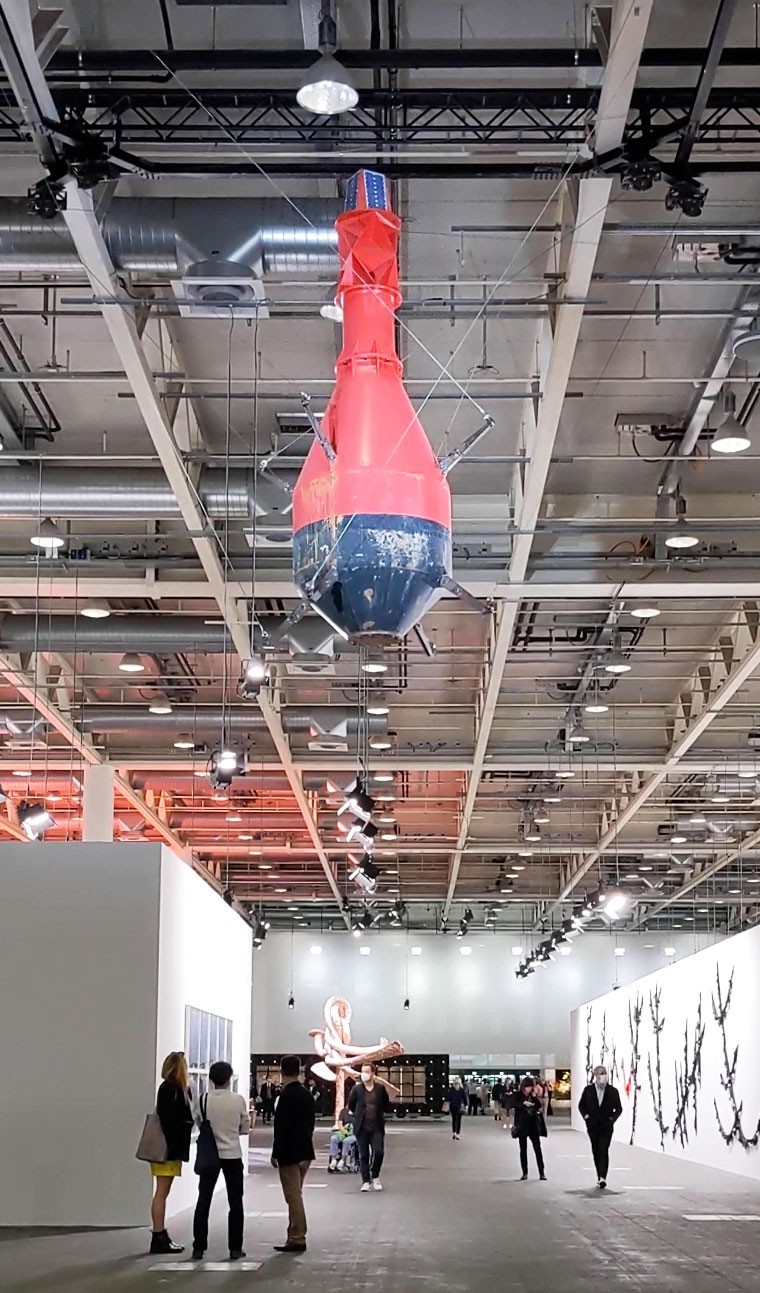 In the Galleries sector, Marian Goodman Gallery presented one of Thomas Struth’s CERN photography series. The large-scale image captures the complex architecture of the COMPASS Experiment at CERN, revealing its intricate cabling system. Situated at the Super Proton Synchrotron (SPS), COMPASS looks at the complex ways in which the elementary quarks and gluons work together to give the particles we observe, from the humble proton to the huge variety of more exotic particles. 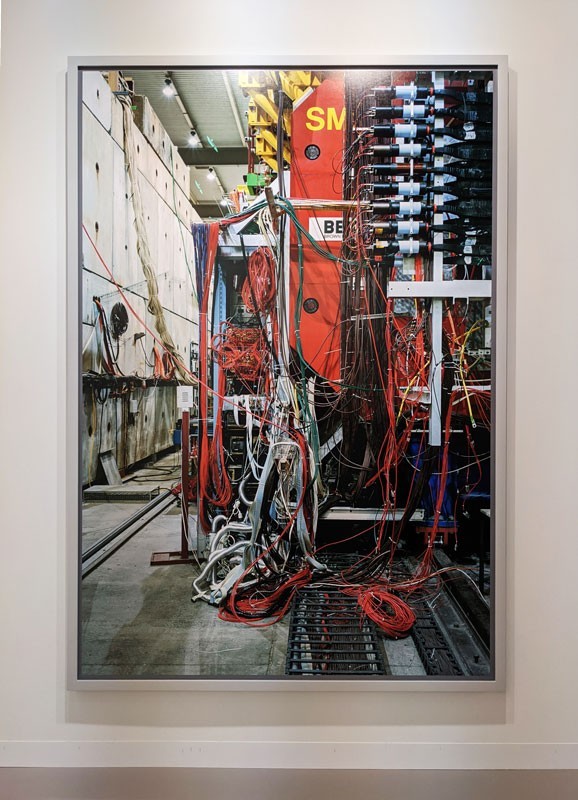 Suzanne Treister's work, winner of the 2018 edition of the Collide Award, was on view at Annely Juda Fine Art’s display. The London-based gallery presented her monumental painting One Million Years Before and After the Internet, 2017, part of her series SURVIVOR (F). Painted between 2016-2019, these works present a potential human/non-human survivor of human civilisation, reconsidering established realities, knowledges and networks through psychedelic speculation in undetermined time and space.

As she remarked to the Serpentine Galleries, her research at CERN on The Holographic Universe Theory of Art History provided “the initial steps towards explorations of the inconceivable properties of black holes as a form of paranormal phenomenon and the beautiful journey through the possibilities of inter-dimensional time-travel, consciousness and the singularity.” 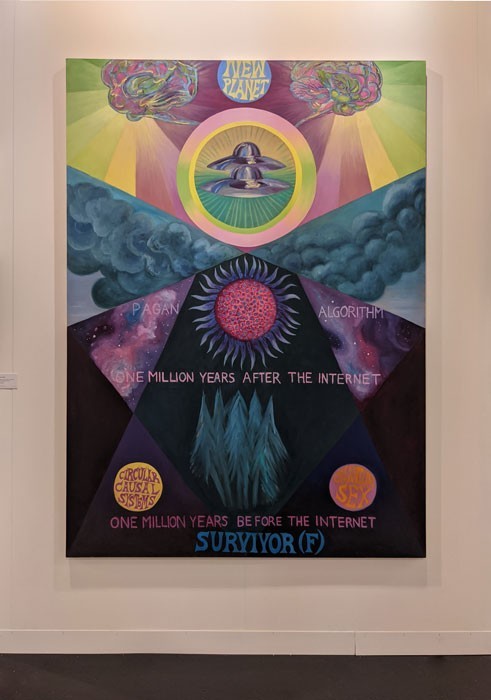 Suzanne Treister, SURVIVOR (F)/One Million Years Before and After the Internet, 2017, presented by Annely Juda Fine Art at Art Basel 2021

Taking place parallel to Art Basel, the Swiss Design Awards exhibition presented works and projects by the finalists and winners of the Swiss Design Competition. AATB, winners of the first edition of Connect, received a Product Design Award for their project Rooting – an algorithm-designed outdoor flooring that generates patterns found in nature. In 2022, Swiss artists Andrea Anner and Thibault Brevet will undertake their three-month residency at CERN to research representations of space and time using industrial robotic arms in dialogue with CERN scientists, engineers and staff.

Article by Ana Prendes, Communications and Content Producer of Arts at CERN