As the winner of the 2019 Accelerate Finland Award, Helsinki-based artist Erich Berger starts his residency in the Laboratory, postponed due to the global pandemic. We spoke to the artist about his aim to develop his DIY gamma radiation sensor device through CERN’s detector research, his openness to the experiences that unfold during the residency, and how humans can deal with the scales and scopes of deep time through planetary thinking.

Interested in radiogenic phenomena, geological processes, and the time scales from deep time to deep futures, Erich Berger’s current research Spectral Landscapes investigates how radioactive processes produce landscapes. Over the last two years, he conducted intense fieldwork in Finland, exploring sites with natural radioactivity originating from the decay of uranium and thorium mineralisations. Berger portrays his collected gamma radiation fields as ‘spectral bodies’. As described by the artist, ‘Their presence is ghostly and can only be detected via extra-sensorial means. The bodies are spectral because they are fields of light and photons, although located in a part of the spectrum that is not visible to the human eye. Invisible but present, the constitution of these gamma bodies is part of our planet’s innate processes in deep time.’

In February, Berger started his virtual encounters with CERN’s community to prepare his on-site residency, which gave him confidence in his fieldwork and helped him better interpret his collected data. Now in the Laboratory, the artist is open to the experiences that unfold during the residency, ‘My aim is not to finish a project here, but to immerse myself in a unique intellectual environment and see where it takes me and my artistic research.’

In March, you had the first virtual meetings with CERN scientists, including conversations about better understanding your collected gamma radiation data from landscapes. How has your research evolved these past months to prepare your on-site residency? Have these encounters informed or influenced your work?

The virtual residency was a really good introduction to CERN and its research for me. It helped me to understand better where I will be working now during November and December. The exchange gave me more clarity on how the residency can support my work, and I could test my ideas and questions in the conversations I had. In retrospect, I am actually quite happy that my residency was postponed and that I could fully concentrate on the fieldwork first. The meetings gave me confidence in my fieldwork process and that the data I am collecting is good enough for what I intend to use it. 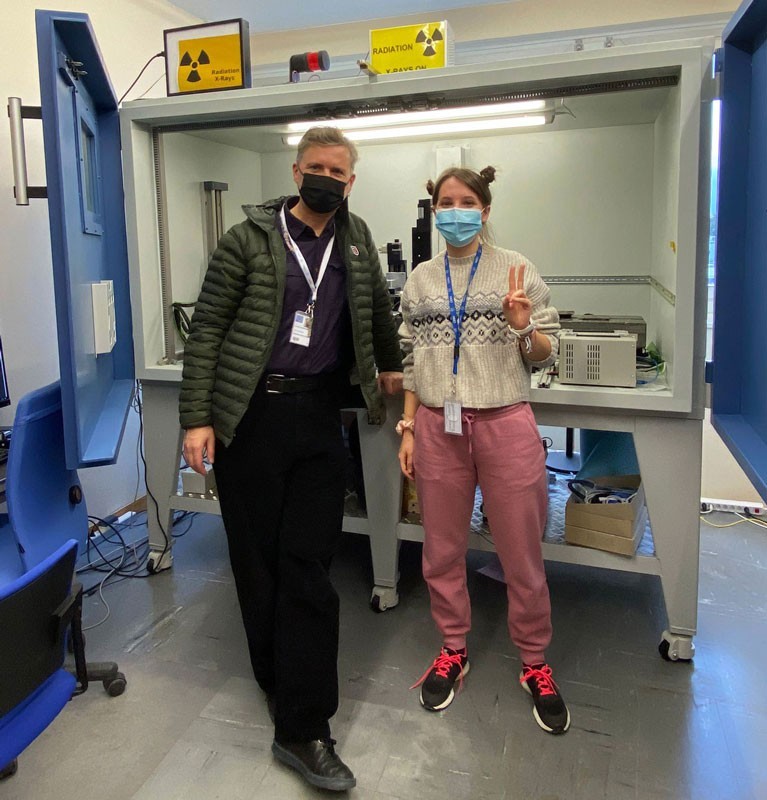 In your artistic practice, you combine fieldwork, rooted in specific geographical and physical places, with laboratory work. CERN is in a unique location, on the border between Switzerland and France, housing particle accelerators and detectors that give insights into the fundamental laws of nature. Could you tell us about the methodologies you plan to use in this particular environment?

I did not set up a rigid plan, but Arts at CERN made a schedule for the start, which is super helpful. I will have several meetings a day selected to support my questions and interests. And these meetings will lead me further to other researchers and questions. So I approach it pretty much like when I go into the field: I start somewhere, and this experience will guide me forward. If I came and followed a strict regime, I would limit my chances of learning something new. My aim is not to finish a project here but to immerse myself in a unique intellectual environment and see where it takes me and my artistic research.

My Spectral Landscape project also counts for two notions I am working with; one is ‘Radical Witnessing’, and the other is ‘Politics of Scale’. ‘Radical Witnessing’ looks into storytelling via materials and objects performing the story attached to them, like in the INHERITANCE project (Berger/Keto, 2016). ‘Politics of Scale’, coined by geographer Neil Smith, acknowledges that scales are constructed and that the application of scales is a political act. Now that human impact exceeds conventional human scale and enters planetary scale, I find it interesting to think it further from anthropocentric geographical space to planetary space and time.

Your DIY sensor device records the geolocated intensity of the gamma radiation. Can you tell us about the technology behind this device and how you developed it? CERN has produced numerous innovations in particle-detection techniques. How do you plan to develop this mapping device further in the Laboratory?

My detector is based on the same principle as some detectors used at CERN’s experiments: radiation or particles interact with special crystals. This interaction results in photons that can be registered electronically and processed further. I use one sensor element and walk around with it or fly it with a drone to map the fields produced by natural uranium and thorium mineralisations. The areas I map are sometimes several hectares, but my protocol is not time-critical. I can assume that the field will be quite the same for a very long time.

On the other hand, CERN experiments simultaneously use thousands of those sensors to record what is happening during a very short moment in a very small volume. In short, my device is using a SiPM (Silicon Photo Multiplier) with a  CsI(Tl) (Thallium activated Cesium Iodide) scintillation crystal. This combination allows translating the gamma radiation into an electric pulse. The SiPM pulses are counted by a microcontroller which also reads GPS data, and every second, a data pair of pulses per second and the geolocation data is saved. With these data, I can later reconstruct the shape of the fields in the computer. The electronic parts are widely available; it is only about combining them for the purpose at hand. So when coming to CERN, I am looking forward to learning more about detector research and how they are employed in the different experiments. I am specifically interested in the Medipix collaboration, which is developing particle cameras, and if I could integrate those chips for my purpose. But then, I am, in general, interested in how the depth of reality can be explored, which counts basically for everything that CERN is doing. 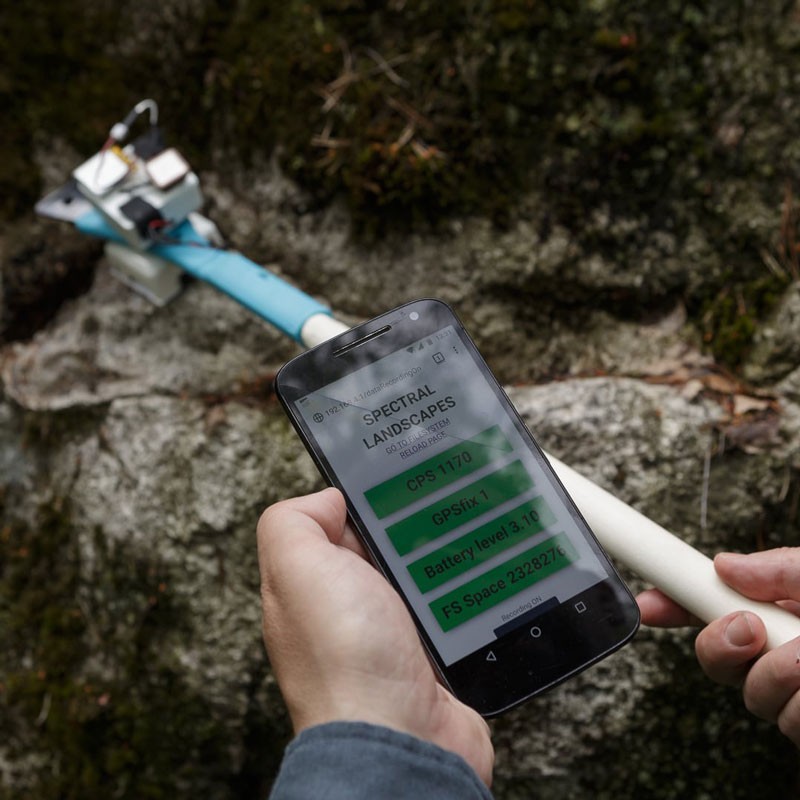 Erich Berger measuring the intensity of the gamma radiation in Finnish landscapes with his DIY sensor device. Photo by Till Bovermann

Kovela-REE, gamma radiation intensity mapping is the first work of art resulting from Spectral Landscapes. You portrayed the gamma radiation fields with your collected data, invisible to the human senses but present in the landscape. How would you describe these ‘spectral bodies’? What do they tell us about the landscapes and our relationship with the environment?

I refer to these bodies as spectral because their presence is ghostly and can only be detected via extra-sensorial means. Still, they are also spectral because they are fields of light and photons, although located in a part of the spectrum not visible to the human eye. Invisible but present, the constitution of these gamma bodies is part of our planet's innate processes in deep time. They conform to continental drift, the biogenic accumulation of oxygen in our atmosphere, the folding of mountain ranges and their weathering. They follow the carvings of geophysical forms, which produce the features of the landscapes we observe around us. Some of those bodies are dozens of meters long and stretch up to a hundred meters, where they fade into the sky and merge with the ever continuous background radiation and particle showers in the earth atmosphere. I imagine this to be a bizarre but immensely beautiful sight. With Kovela-REE, gamma radiation intensity mapping, I did not try to approximate such a vista; it was, for now, to simply show the evidence of such a body.

Unlike other artists who work with scientific data obtained by laboratories, your research is based on your own data collection. How can artistic fieldwork help to transform the data that seems outside the scope of science into knowledge?

The data I produce is outside of science because they are not produced within a scientific experiment or a scientifically guided initiative. I collect my own data because by doing so, the relation between the world and my questions and thinking becomes intertwined through my own experience. This gives the data context and brings them alive. The data alone would be abstract, but by being in the field, I walk the forest and see what is there: the life, the features of geology and mineralogy, the relation to the surroundings. I can let my mind wander to, for example, explore the deep time of the site and its deep future, what is lost when this place is turned into a mine to extract the minerals or how it will look like after the next ice age just after the ice retreated. I ask myself, what do we leave behind, what will the future inherit from us? How can we as individuals and society deal with the scales and scopes of deep time as we get increasingly entangled in planetary time scales?

I wish that the experiences I offer in my work assist people in turning their attention towards the complexities of our being and the depth of reality and that human scales operate just among many others. Geologist Marcia Bjornerud for example, introduces the concept of timefulness to point out that we should adopt a polytemporal world view to help us develop planetary thinking. Just because the gamma fields I observe in the landscape do not change during my lifetime does not mean they have been or will always be there.

You have been researching the crossovers and divergences within the artistic and scientific fields for many years. How has your research evolved? How would you describe the field with the ever-growing interest of contemporary artists in science and emerging technologies?

I am not only working as an artist but also as a curator and cultural worker. I work with an artist association based in Helsinki, Finland, called the Bioart Society. There we foster interactions between art and science with a focus on biology, ecology and life sciences. When we started in 2009, and we were by far not the first ones, the idea of art collaborating with science was still quite a niche approach, while today it definitely can be already located in the mainstream. This counts specifically for ecological or climate-related questions. But also, art education is becoming increasingly interdisciplinary, which is beneficial as the literacy and understanding of how to work in a multidisciplinary environment is part of the education. I wish that would also be stronger implemented in the sciences. However, education is not everything.

When setting up collaborations, I can often observe a certain naivety and bias among artists and scientists to know what science is or the other way around and what artists are doing, including myself. At first, I was a bit tired of this.  But now, I know that this is part of the process and also part of my work. What I find really interesting and rewarding is that such collaborations have the possibility to reveal and illuminate the social, political and cultural context that brought them into being. Artists can also look, for example, into questions like what kind of data, information and experience remain outside of the scope of scientific research and how can this be turned into knowledge through artistic methods. Finally, as a cultural worker, it is fascinating to be alert of practices and approaches that emerge in such situations.

Accelerate is a country-specific residency programme of one month. Accelerate Finland is organised in partnership with the curatorial platform Capsula (art-science-nature)